I Have no Faith in BIDs (Business Improvement Districts)

What is a BID?

A Business Improvement District (BID) is an exciting way to help businesses take control of and improve their trading environment. It is exciting for the people organising this.

They are most likely working with the West Suffolk Council and a company called Mosaic headed up by Mo Aswat.

They are excited about all of the money they are going to make out of local businesses under the assumption they can “save the high street” whereas what is going on, is the local council are discharging their obligations to a private company.

Mo Aswat told those dealing with the Heart of Haverhill BID to play it low key… why? The West Suffolk Council has 10 hereditaments for Haverhill.

That’s 10 votes which will include car parks and toilets. It will be officials at the council who use these votes to vote YES, which is why YOU must counteract those YES votes.

Up to £50,000 per bid will be paid to Mosaic which is initially Local Authority / Government funded and then repaid out of the levy money or not, depending on the vote outcome.

This money would have been discussed at a Council meeting. So initially this is public money!

It is an arrangement whereby businesses get together, decide what improvements they want to make in their Town Centre, how they will manage these and what it will cost them. This all goes into a business plan which is voted on by all those who would have to pay.

Businesses do not “get together”. Any changes are decided by a board of Directors that the businesses do not get a vote on. Yes, you have to vote, if you do not vote, the majority votes could be made by the officials from the local council.

These are not even the elected officials making this yes vote. If you disagree with the Yes campaign, you must ensure you vote NO.

The BID lasts for a maximum of five years and must be able to demonstrate how it benefits the businesses that have funded it.

As an example, a business in Bury St Edmunds used to pay 1.75% of their business rates. This was increased at the last ballot to 2%.

So, with a YES vote, you are legally forced to pay this for 5 years. If you refuse, they will take you to court to get their money.

There have been over 300 BIDs developed in the UK since the legislation was introduced in September 2004 – bringing in more than £100 million of new finance to develop town centres.

A number of these BIDs have failed, or been kicked out for various reasons. Some have fallen foul by using under hand stealth tactics to get a YES vote.

Love Newmarket conducted their latest ballot during lockdown 2021. Ballots were posted out to businesses with no people in them.

Not everyone received a ballot and therefore missed out on being able to vote no.

Many businesses commented that they have never even met the head of the Love Newmarket BID and could not see what they had accomplished for the town.

Bury St Edmunds, Newmarket, Cambridge and Saffron Walden have all seen the benefits of having a BID. Now is the time for the businesses of Haverhill to join together and make a real impact to the future of OUR town.

Benefits, what benefits? They cannot actually say what benefits they have been to the towns, but they CAN see benefits to their personal bank accounts.
The Bury St Edmunds BID takes £440,000pa. Out of this they take 3 salaries totalling £120,000pa. (that’s 27.27%)

During Lockdown 2020 when businesses were struggling the “Our Bury St Edmunds” BID still demanded their pound of flesh. They made the money they were expecting to make. The businesses of the town did not.

The local authority effectively absolving themselves of these responsibilities to protect you and your businesses.

In most cases, they include marketing and promotional activities, increasing safety and security for businesses and customers, attracting new businesses and investment, reducing costs and enhancing the customer experience.

How can they be “reducing costs” when they are charging you more than you have been paying up until now? Enhancing the customer experience – what does that even mean? 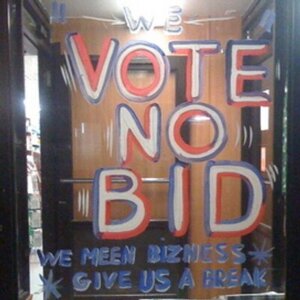 The important thing is that the BID is focused on delivering the operational and other projects as determined by detailed consultation with all businesses in the BID area.

I wouldn’t think of a two-page Power point Presentation as a detailed consultation.

The Heart of Haverhill posted a survey on their website which ended in November 2021, yet the results of that survey have not been published. Why?

Who pays for a BID?

You do. The West Suffolk Council will send out the bills. ARP (Anglian Revenue Partnership – based in Thetford, government department) will collect the “Levy” (they avoid calling it a Tax), and then the money is passed from the WSC to the BID. They make things as complicated as possible to try and get you into knots.

Once projects and services have been agreed by businesses along with how they are going to be delivered and managed, they are costed up and set out in a detailed business plan.

I think what they mean here, is when a few directors have decided what they are going to do, it won’t be you!

The cost to each business is worked out on a pro rata basis. ‘This is called the ‘BID LEVY’. An independent and formal vote then takes place

on the agreed projects and services and if the majority vote YES then ALL within the BID area HAVE to pay.

The BID levy is normally paid by the occupiers of a property. In addition, BIDs can draw in other voluntary funding, grants and ‘in kind’ contributions to supplement the BID levy.

There are over more than 300 BIDs across the UK investing more than £300m in our towns and cities.

BIDs are a mechanism by which businesses get together to carry out improvements in projects and services and raise the profile of a defined geographical area.

This most likely means the favourites of the BID directors get preferential treatment and are given social media recognition. If you are not, you are ignored – Not visited – Not promoted. But they will still take your money.

In Bury St Edmunds, Market Traders fall under the hereditament (vote) known as Market Tolls. So effectively they are members of the BID by proxy, however, the BID does not give them recognition. Bricks & mortar businesses are offered reduced rates for pitches at fairs, yet the regular Market Traders are charged a premium.

BIDs are directly funded by the businesses who fall within the area boundary. BID businesses pay an annual amount over a 5-year period to carry out the improvements.

You have no say in this. Can they define what “improvements” they are going to make? The Felixstowe BID was forced through last year, again during lockdown. Business have seen no change since then. One business told me

“I feel the vote was very underhand, so many businesses didn’t even know the vote was happening. I do think it should have been delayed but various interests wanted their money. Since then, the businesses have had nothing for their money, a few newsletters and a glass of Prosecco. The bid manager has no sense of urgency, she’s never seen in the town, she just has meetings about meetings and has missed all the key dates when there could have been events to benefit the town (bank holiday, half term etc)”

BIDs are voted on by the businesses who would pay. They decide if they want the initiative to go ahead.

Vote YES and you are handcuffed to them

BIDs last for a maximum of 5 years

Every year for 5 years…

And your point is?

In order for a BID to be established, a ballot of all eligible businesses in the BID area is held. For the ballot to be successful, the following conditions must be met:

Over 50% of businesses that vote must vote in favour of the BID.

If you do not vote, the council will swing the vote in their favour as they will hold votes (hereditaments) for Car Parks, Public Toilets, and other Council owned property in the area. YES! a toilet gets a vote!

Of the businesses that vote, those voting yes must represent a greater total rateable value than the ones that vote no.

In Bury St Edmunds, do not expect the local newspaper, the Bury Free Press to say anything against the BID. Why? The Editor, Barry Peters is also a board member of the BID.

There is also a member of the West Suffolk Council on the board. As well as this, there is a conservative councillor on the board.

The CEO of the BID is an ex police officer. I wonder why they keep going to the Town Council for Grants, are they not able to work within their own budget? They tried to get the West Suffolk Council not to increase car parking charges.

They failed in this attempt, and now there are less people coming into town, preferring to go elsewhere to shop. What part of IMPROVEMENT is not getting through?

In Newmarket there are two tory councillors on the BID board of Directors. They tried to install a chairman about Paul Brown, and he was not happy.

There are 2 separate councils dealing with the Yorkshire Coast BID. East Riding and Scarborough. A unique situation which does not work.

BIDs that have either been kicked out, or did not get re-elected