eXplore Which Flag is Correct?

So you think you know your flags of Suffolk?

Its funny isn’t it, over the last few years there has been a rise in the display of flags. None more so that those used for the county of Suffolk.

The 5 flags we are discussing all claim to represent either Edmund or Suffolk, but each of them have very different symbolism.

The Sunrise flag, is generally associated with the Suffolk County Council, as this is also their coat of arms. The Sun represents the fact that Suffolk has the most easterly point in the British Isles, and therefore gets the sun first.

The Flag of East Anglia

The Flag of East Anglia, represents Norfolk, Suffolk and part of Cambridgeshire. The areas which were ruled over by Edmund. It has also been suggested that the 3 crowns represent The Father, The Son and The Holy Ghost. The blue and the gold, are also the colours from which the flag of Sweden is derived.

“The flag of East Anglia was created in 1904, so is the oldest of the 5, and the arms of the 3 crowns are those of East Anglia but were themselves derived from imaginary arms created for St Edmund in the 13th century” Dr Francis Young

The flag has had a strong association with the Anglo-Saxons, and is therefore also assumed to be English. The flag has therefore sometimes been associated with nationalism. A quote from someone writing on Wikipedia said that,

“There is no archaeological evidence that the early Anglo-Saxons used a white dragon to represent themselves, however, some modern English nationalist groups still promote its use in place of the St George’s cross to emphasise their claim of ancestry from the Germanic Anglo-Saxons, in contradistinction to the “Celtic” Britons.”

This was later changed to, “The White dragon is said to have been carried at the Battle of Stamford Bridge and the Battle of Hastings. One the Bayeux Tapestry this is shown in the form of two images of a dragon.”

This is true, however, the flag is being held by a Norman and not an Anglo Saxon on the Bayeux Tapestry. The Tapestry of course being based on the events of 1066. So, nearly 100 years after the death of our Edmund.’

“On the white dragon flag, the ultimate origin is Geoffrey of Monmouth’s 12th-century story about a red dragon (representing the Britons) fighting a white dragon (representing England), hence why Wales adopts the red dragon. The adoption of the white dragon for England thus references that myth and is the inverse of the red dragon of Wales, but this is quite a recent development. Yes, dragon flags were carried into battle by English monarchs but these were gold rather than white, and were more like a wind-sock shaped like a dragon than a flag with a dragon depicted on it” –
“But the idea that the white dragon has anything to do with St Edmund is complete nonsense. St Edmund’s own banner, which he supposedly carried into battle against the Danes, depicted Adam and Eve eating from the tree of knowledge and the Lamb of God” Dr Francis Young 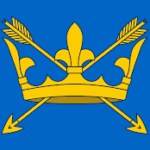 The Suffolk Flag is the most recent addition however, The Flag Institute registered the design after Suffolk County Council displayed the flag on the first “Suffolk Day”, (21st June 2017).

The Flag of Edmund of Suffolk

The Flag of Edmund of Suffolk was created around 2006 by Bill Bulstrode of Framlingham. It was created to promote the reinstatement of Edmund as the Patron Saint of England. The campaign was taken up by Mark Murphy from BBC Radio Suffolk and a petition was drawn up and presented to Number 10 Downing Street, however it was unsuccessful… on that occasion…

This also inspired Brian Gobey to take the flag on tour. Mostly displayed at football matches, but always as proud as punch to be showing the flag of Edmund of Suffolk.

The flag itself gives a nod, to Saint George, with the red cross, and of course the crown crossed with two arrows and the shield of blue. The blue shield in heraldic terms represents piety and sincerity. Although this is not an official flag, it has toured the world. It has been flown and displayed on every continent, including Antarctica! This is the flag most associated with St Edmunds Day, 20th November, which commemorates the death of Edmund.

The campaign to celebrate St Edmunds Day was again revived in 2017 and 2018 by the We Love Bury St Edmunds! Facebook Group. They encouraged the town businesses to display the flag and bunting and the effect was truly remarkable. It also led to an Oratorio being written and performed by French film composer, Jean Musy, and Eurovision winner, Anne-Marie David.

The World Flag Tour has also become a big part of the We Love Bury St Edmunds Facebook Group. So many people, and so proud and happy to show off the flag and their travels. But you need to join the group to see that!

With the exception of the White Dragon, the symbols of the crown, crossed with arrows is the constant. This is not only true of the flags but can be found in many other places. Greene King uses this in their logo, as do the Suffolk Scouts, Suffolk West Women’s Institute and Bury Town Football Club.

About We Love Bury St Edmunds!