Bury St Edmunds: England’s Compostela. With the possible exception of Jerusalem, the shrine of Santiago de Compostela in northern Spain is the world’s most famous Christian pilgrimage destination. The reputed burial place of St James the Great has become a byword for the idea of pilgrimage itself, with many people walking the Camino – the ancient pilgrim route to Santiago – regardless of whether they have any personal faith or even if they have no particular desire to visit the shrine of St James.

The Camino has become a pilgrimage in its own right, a journey whose purpose is the journey itself.

So what is Bury St Edmunds’s connection with Santiago de Compostela?

Throughout the centuries, people have vowed to make pilgrimages to Santiago, just as people often vowed to make pilgrimages to Rome or Jerusalem. One of those people was Anselm, who became Abbot of St Edmunds in 1121 and ruled until his death in 1148. Anselm was an Italian, and already abbot of the monastery of Saints Alexius and Saba in Rome when he was elected to St Edmunds Abbey.

He was also the nephew of a much more famous Anselm – St Anselm, Archbishop of Canterbury and a celebrated philosopher. Like his uncle, Abbot Anselm was a devout and reforming monk who introduced a number of new cults of saints to Bury, but one thing bothered Anselm; his desire to go on pilgrimage to Compostela, and he expressed again and again to the monks his desire to make the journey. 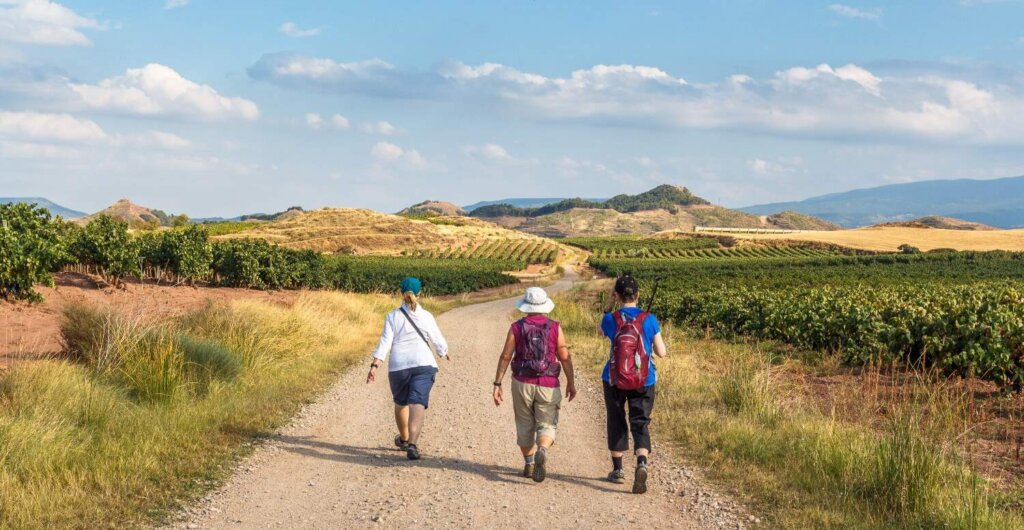 In the 12th century long journeys were immensely dangerous, and a pilgrim (even a high status one) had perhaps only a 50/50 chance of returning alive. Robbers, disease, and shipwreck were the main threats, with the additional opportunity to perish in the mountain passes of the Pyrenees on the way to Compostela. It is understandable, then, that Anselm’s monastic colleagues were not keen on the idea of their abbot going to Spain – the abbey had faced over two decades of uncertainty and instability before Anselm’s election, and Anselm was such a successful abbot that the monks were loath to lose him.

Furthermore, in 1138 Anselm was elected Bishop of London, and although political machinations meant he never got to take up the post, this interlude may have convinced him that he was unlikely ever to leave England again. Anselm decided, therefore, on a symbolic act of devotion that would replace his vow of pilgrimage: the building of a church in Bury St Edmunds in honour of St James. 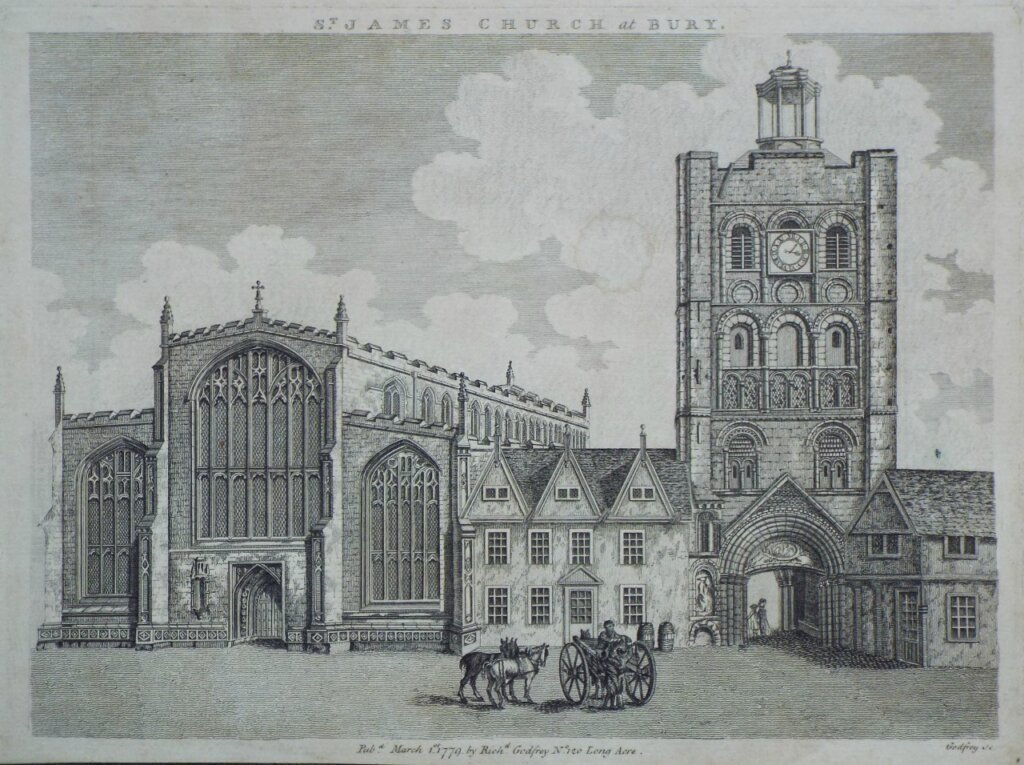 As it happened, the townsfolk of Bury were in dire need of a new church. The steady westward expansion of the massive abbey church begun by Abbot Baldwin in around 1081 meant that the old parish church of St Denis (probably an Anglo-Saxon building) had been demolished to make way for the abbey’s west end, just as the church of St Mary had been knocked down and rebuilt on the south side of the Great Churchyard to make way for the abbey church’s south transept. However, the church of St Denis had not yet been rebuilt, so Anselm determined to replace it with a new church dedicated to St James the Great, just in front of the abbey church. In fact, the great gate of the abbey that Anselm himself built – now known as the Norman Tower – became the belfry of the new church, as it remains to this day.

It seems fitting that this rather Italianate arrangement (many great Italian churches have detached bell towers) serves to remind us of Bury’s Italian abbot, although the fact that St James’s church was subsequently rebuilt in a later style has obscured the connection between the two buildings.

Although St James’s church was built purely in fulfilment of a personal vow, and to provide the townsfolk of Bury with a new parish church, it soon came to take on an additional significance. Its position right next to the great bronze doors of the abbey meant that it was very visible to pilgrims; and this, together with the church’s dedication to the patron saint of pilgrims, meant that it became a place that honoured the pilgrims and their pilgrimage to St Edmund’s shrine, one of England’s most important pilgrim destinations. In fact, it was not uncommon for pilgrimage shrines to have a chapel dedicated to St James in order to honour the pilgrims, and Bury was one of the first places in England where this was the case.

There is a certain sense, then, in which this stand-in church for Santiago de Compostela, at the gates of one of the greatest of England’s pilgrim destinations, might be considered an English Compostela – a suitable stand-in shrine for anyone wishing to make a spiritual pilgrimage today but prevented, like Abbot Anselm, from making the journey to Compostela itself.

St James’s church has undergone many changes; it was completely rebuilt by Abbot William Bunting from 1503 onwards, who employed the great perpendicular stonemason John Wastell. Wastell’s distinctive string coursing around the church depicts the famous scallop shell of St James, recalling the minds of pilgrims to reflect on the patron saint of every pilgrimage. As a parish church, St James’s survived the dissolution of the monastery that created it; in 1648 when it was in use as a gunpowder store, it was the scene of a Royalist insurrection against Parliamentarian rule, but survived.

The church also received many different chancels over the years, but the greatest change came in 1914 when it was selected to become the cathedral church of the new Diocese of St Edmundsbury and Ipswich.

The new St Edmundsbury Cathedral would soon boast a choir and half-finished transepts designed by Stephen Dykes-Bower, until the Neo-Gothic vision of the cathedral was finally carried through with the completion of a tower by the Gothic Design Partnership in 2005. Now dedicated jointly to St James and St Edmund, the Cathedral serves as a reminder of both the act of pilgrimage and the identity of the one for whom pilgrims came to Bury St Edmunds. 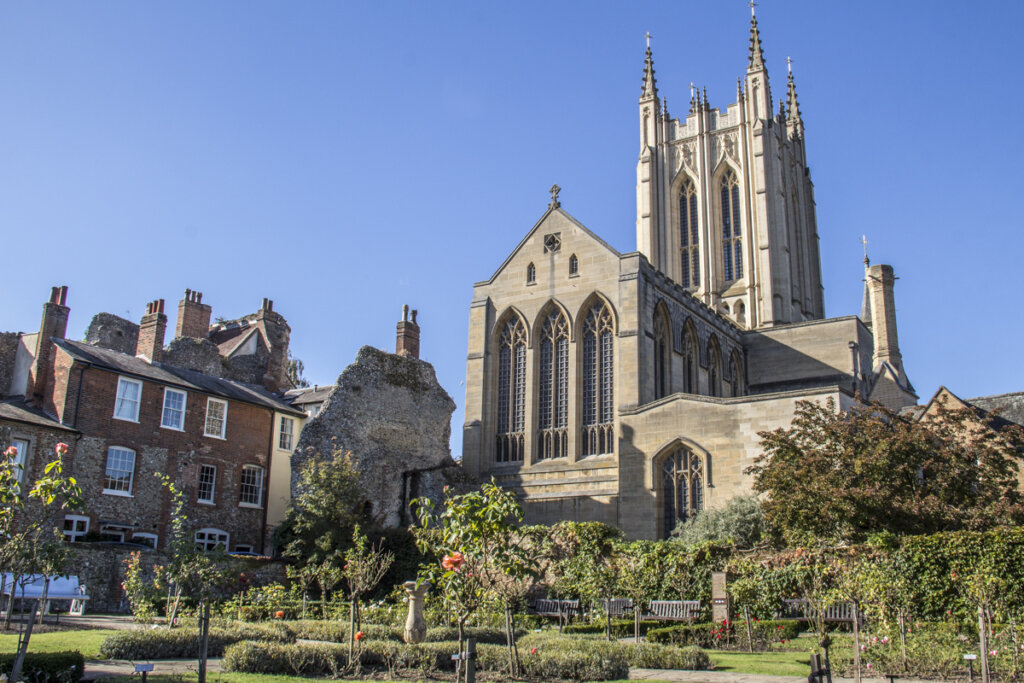 Other articles by Dr Francis Young

The Abbey of Bury St Edmunds